What is the TU Delft Solar Boat Team?

The TU Delft Solar Boat Team is one of the Dreamteams of the TU Delft. Our team consists of 21 ambitious students from eight different study backgrounds. In one year the students go through the process of designing, producing and finally racing a boat that runs on green energy. Every year, our team is fully committed to making our boat perform optimally in spectacular races. Here we can show all the applications of our advanced technologies.

This project gives our students the opportunity to gain practical experience and learn what it is like to work together in a multidisciplinary team towards an ambitious goal. Over the course of one year, they will gain skills that will benefit them for the rest of their professional careers. With our team we shape the engineers of a sustainable future.

For the last 15 years our boats have been successfully sailing on the power of the sun. This means 15 years of sustainable innovation and 15 years of inspiring the maritime sector. This year we have an exciting new plan. We, as the TU Delft Solar Boat Team 2021, want to take the next big step towards a green maritime industry. We want to explore uncharted waters and work on a project that is even more relevant.

This year, our team is building a boat that sails on hydrogen. We call this project Hydro Motion. We will switch from generating energy with solar panels to storing energy in a green way. Hydrogen is ideal for this purpose and has enormous potential.  We want to inspire the entire maritime industry by showing what is possible with a hydrogen boat. Together we can take the necessary steps towards sustainable shipping.

We want to build this hydrogen powered boat and compete in the open sea class at the world championships next summer in Monaco. Here we can show what is really possible with just a small amount of green energy. We are together with our whole team, very excited for this project.

In the history of the TU Delft Solar Boat Team

In 2005 several Maritime Engineering students founded the TU Delft Solar Boat Team. A year later, winning the “Frisian Solar Challenge” was set as goal and achieved. Following this success, a second team was founded in 2008 to design an entirely new solar boat. With this, the team was able to prolong its top position.

In 2010 the switch to hydrofoils has been made. This switch introduced a completely new way of sailing. The two teams that followed also used hydrofoils  but were unfortunately not able to win in the Dutch Solar Challenge.

After four years the team went into a new direction. They built a boat that sailed on two so-called struts; T-shaped hydrofoils. While sailing, the hull comes completely out of the water, which is a spectacular sight. With this concept a speed of 51 km/h was reached in 2015, a record within the team. In 2016 that record was broken again with a speed of 55 km/h.

In 2017 the team designed a boat with three hydrofoils. In addition to lowering resistance, the wings now also had the function of improving the stability and manoeuvrability of the boat.

The most important technical development in the Solar Boat of 2018 was the double steering system. Because there were elements in the races where efficiency and manoeuvrability were essential, a system was devised in which the pilot could move the front and rear strut independently. The biggest challenges were to keep it as compact as possible and to guarantee ease of use during the race.

In 2019, the team designed a solar boat for the open sea. With this boat, they became world champions in the Offshore Class in Monaco.

Last year, efficiency was number one. By reducing the size of the sun deck and thus the hull, the resistance was greatly reduced. This enabled the 2020 boat to sail on just the power of a water cooker.

This year, the 2021 team is moving into uncharted waters with our project Hydro Motion. We switch from generating energy with solar panels to storing energy in a green way. This year we build a hydrogen powered boat. To show the potential and power of hydrogen our boat will race at the world championships on the open sea of Monaco.

Team 2006  This is the first boat made by the TU Delft Solar Boat Team for the first version of the Frisian Solar Challenge. They managed to win the race with a considerable lead on the number two. 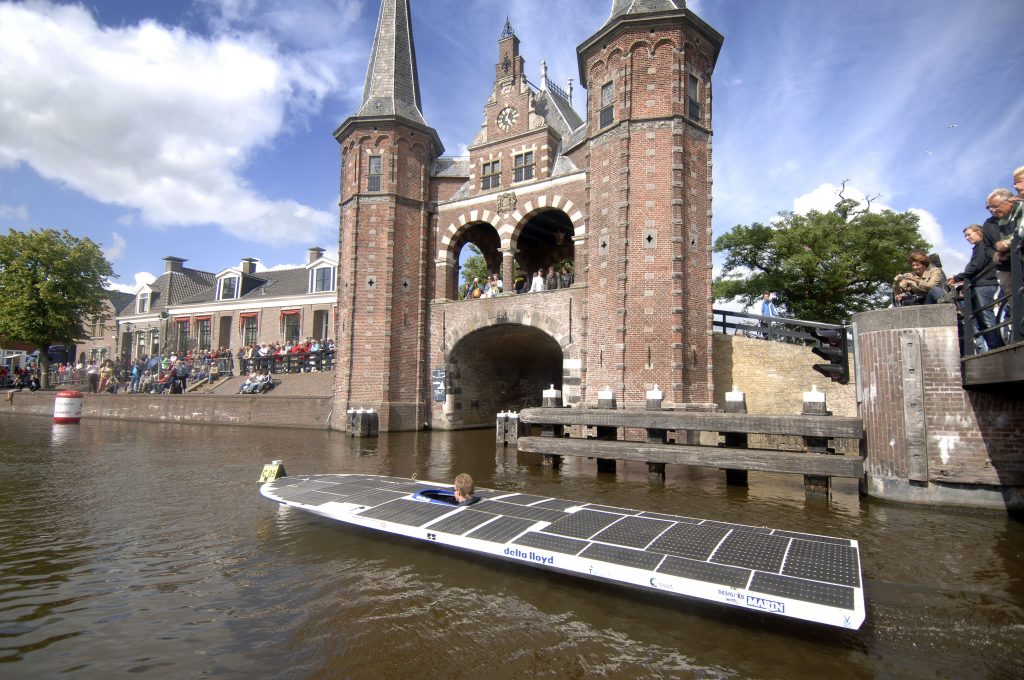 Team 2008The 2008 team, then named the Delta Lloyd Solar Team, managed to win the Frisian Solar Challenge with this boat with a lead of three hours on the number two. The boat has a very small underwater hull (a depth of 10 cm), so the resistance of the hull is minimal. This design turned out to be very popular: several teams rented our mould in the years after 2008 to build their own solar boat. 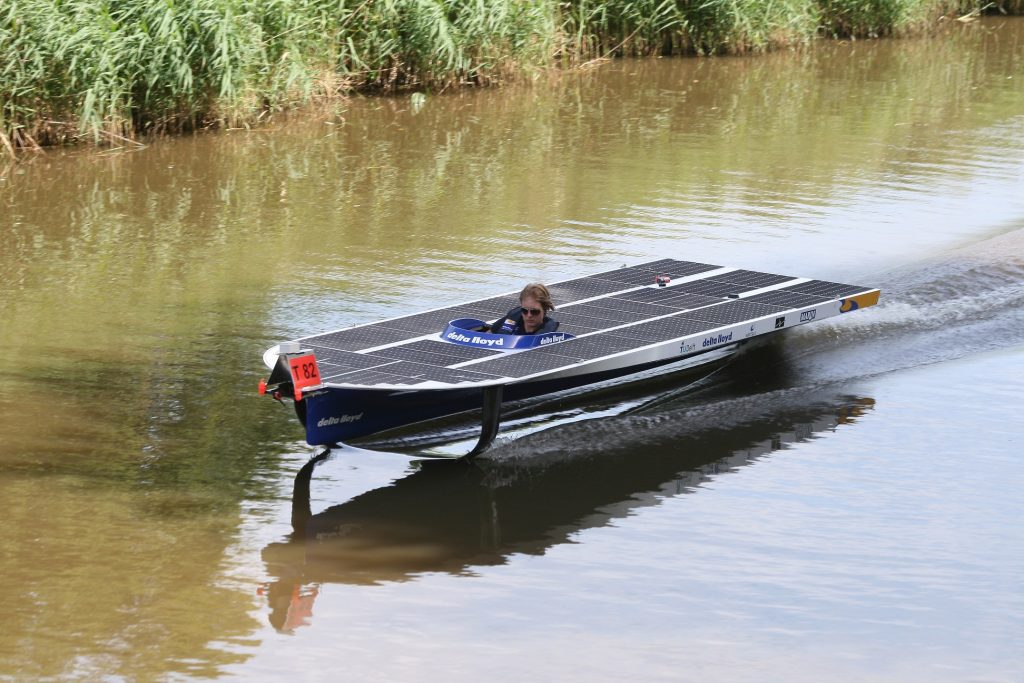 Team 2010In 2010, the team started using hydrofoils in the design for the first time. With this boat the team became third at Frisian Solar Challenge 2010. The hydrofoils ensure that the boat, when it reaches a certain speed, is lifted out of the water. This way, the boat has a lot less resistance and with the same power it can now sail about one and a half times as fast as the boat in 2008. 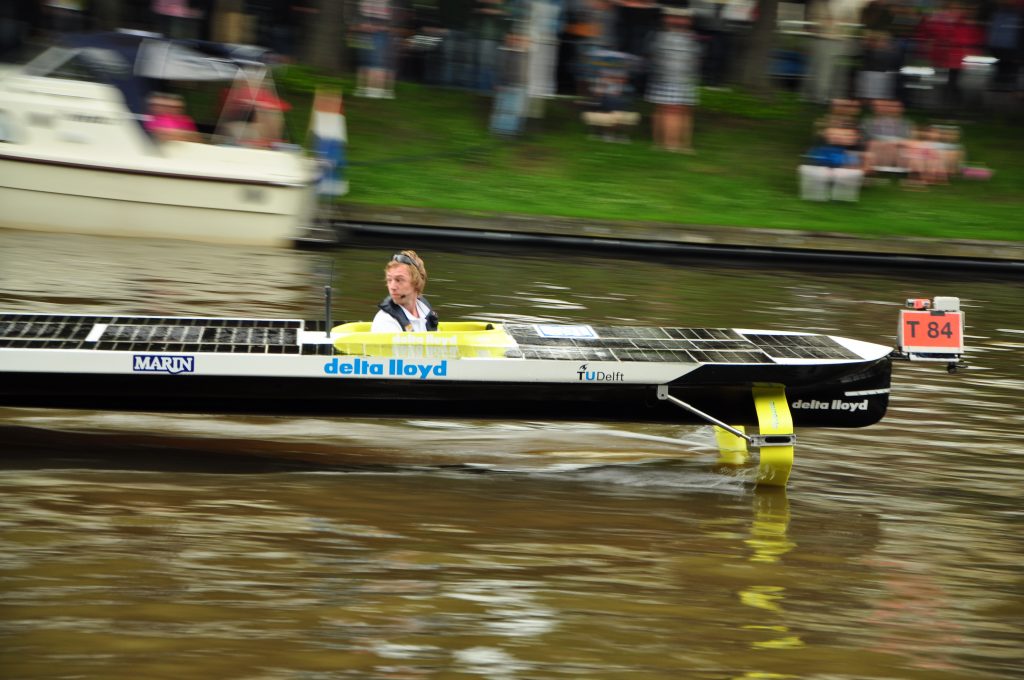 Team 2012The 2012 team, then under the name Delta Lloyd Solar Boat Team, again succeeded in developing a boat that can fly just above the water at different speeds. They used hydrofoils, which lifted the entire boat out of the water. At high speeds, the angle of attack of all the wings can be changed, so that less lift is generated. 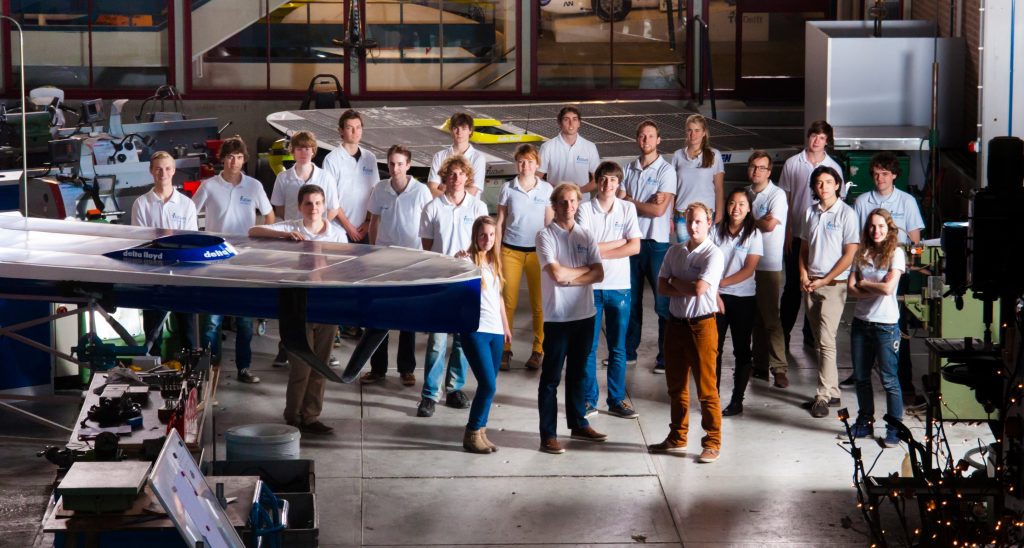 Team 2014With this boat the 2014 team threw high praise: it was the first boat with a double T-strut hydrofoil configuration that ever appeared at the start of the DONG Energy Solar Challenge. The boat has two support points in the water, which gives it not only the characteristics of an airplane, but also the characteristics of a bicycle. 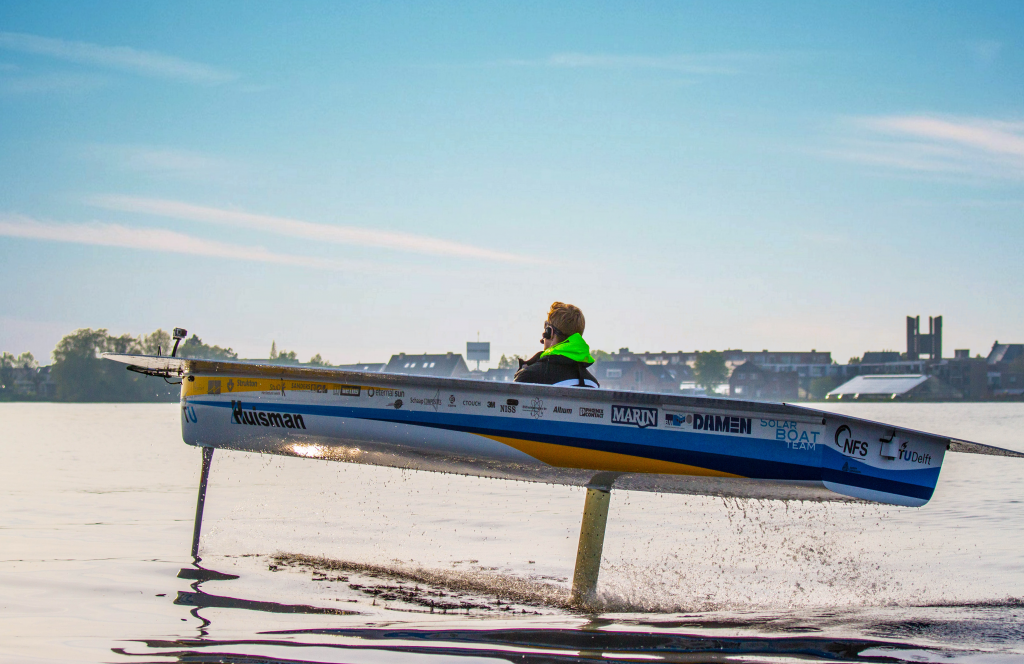 Team 2015For the boat of 2015, the boat built by the team of 2014 was used as a basis. They mainly adapted the propulsion so that the boat was able to reach a speed of 51 km/h. In 2015 the boat achieved a third place at the Solar1 Cup and won the design award at the DONG Energy Solar Challenge. 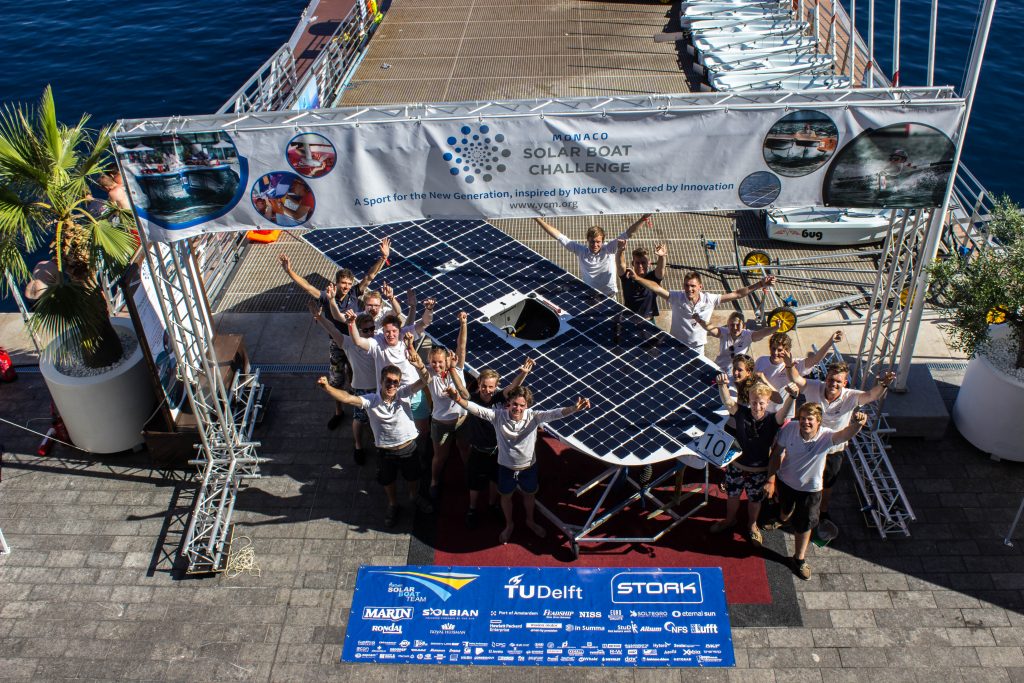 Team 2016The 2016 team completely redesigned the hull and improved the wings. This allowed the boat to reach speeds of up to 55 km/h, which is a record within the team! This year they participated in the Dutch Solar Challenge, where they achieved a second place. The team also participated in the Monaco Solar Boat challenge, where they became second and won the Riva beauty award! 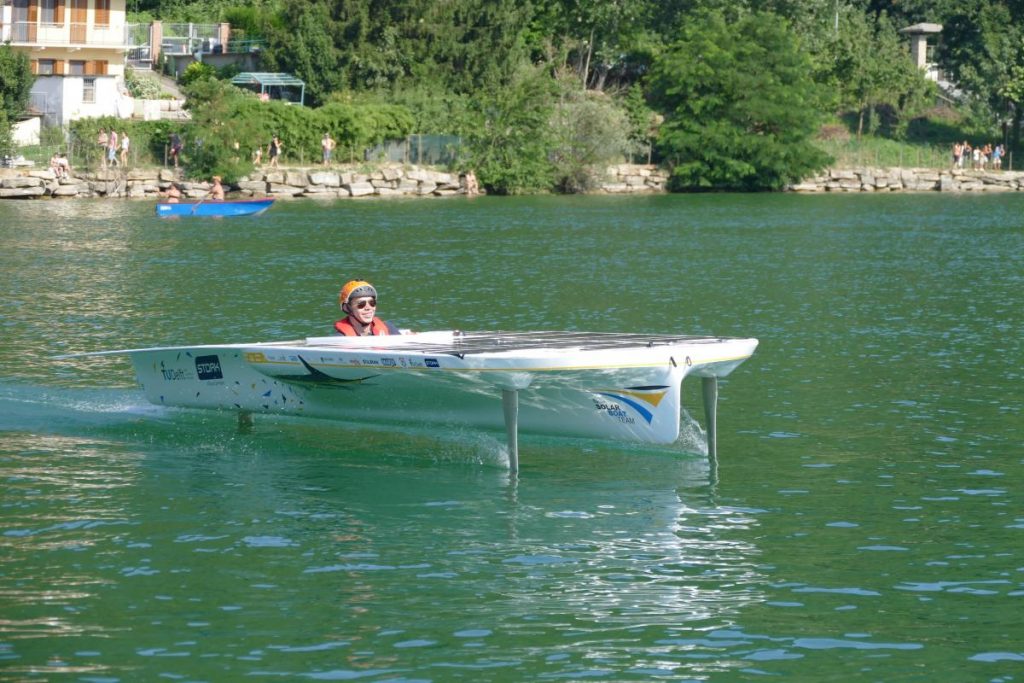 Team 2017The 2017 team has improved manoeuvrability and stability by designing a boat with three hydrofoils. Despite this extra hydrofoil and the larger hull, the boat achieved a speed of up to 48 km/h. This year, the team participated in the Monaco Solar Boat Challenge and wanted to cross the English Channel. Unfortunately, this crossing was cancelled due to the risks at that time. 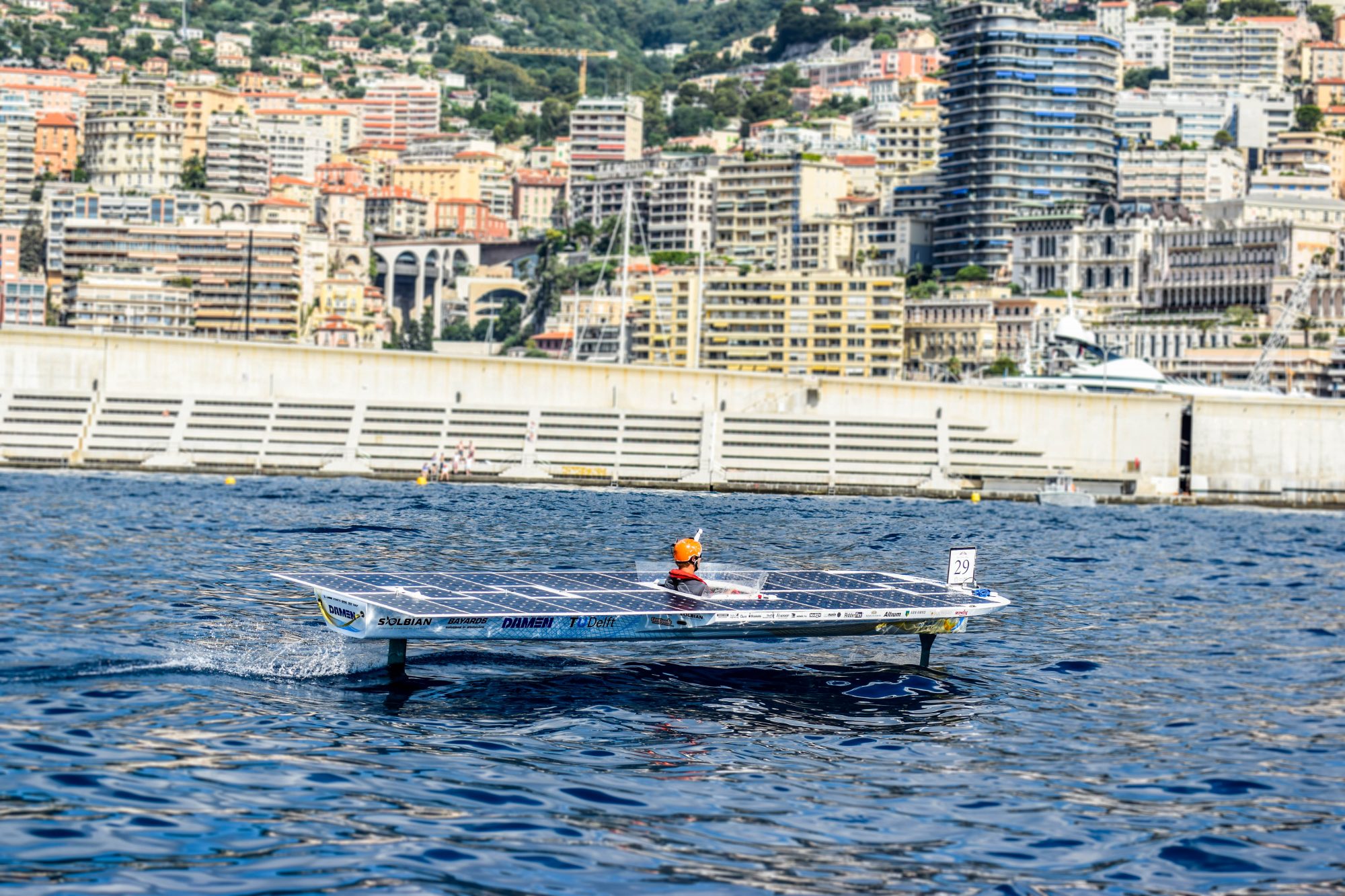 Team 2018The 2018 team has again opted for the double T-strut configuration. With this configuration, they reached a speed of 50 km/h. Because the boat could steer with both the front and the rear strut, the boat was both manoeuvrable and efficient. They became second in the Solar Sport One competition. 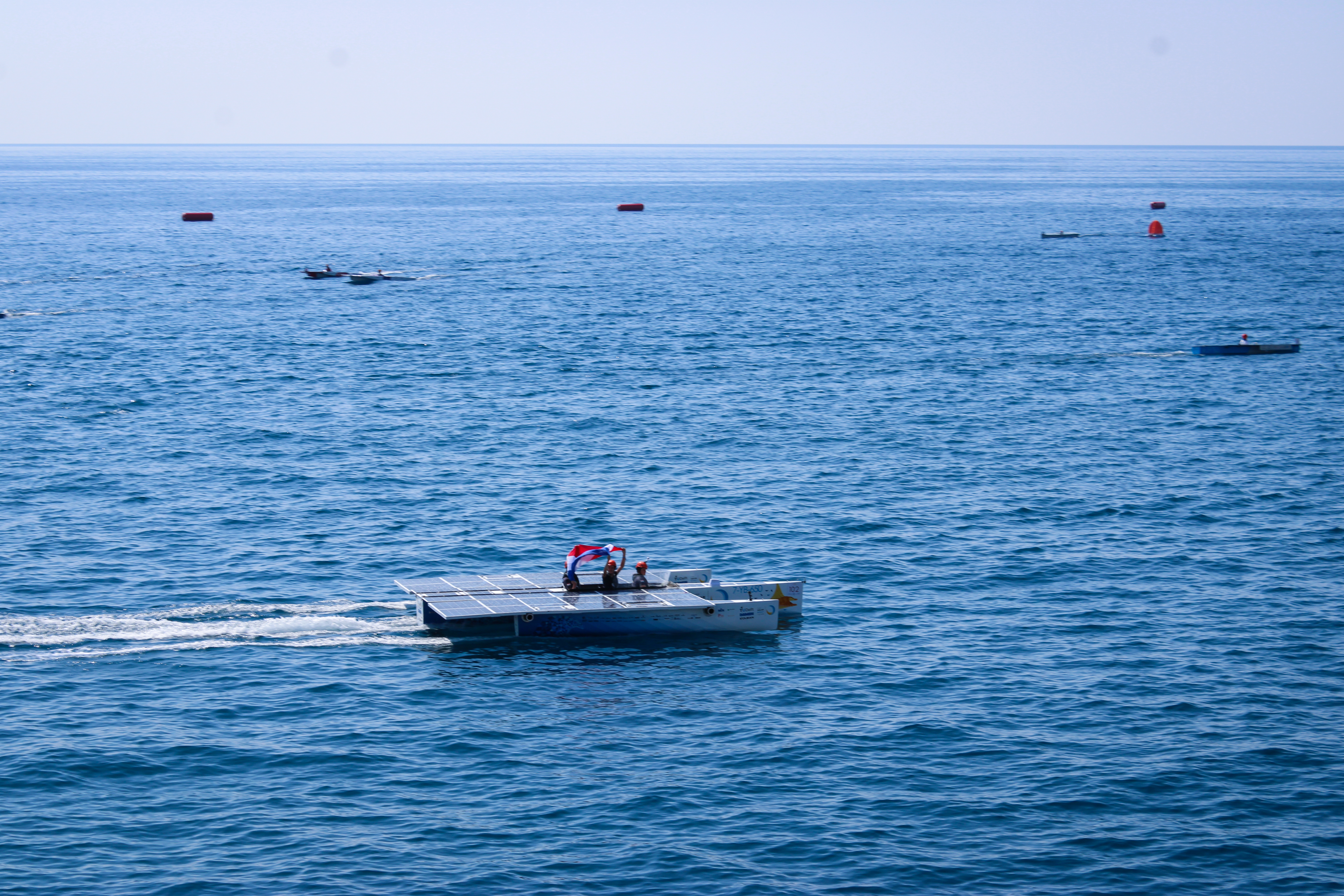 Team 2019The 2019 team has designed a solar boat for the open sea. This boat has three hulls. With a sun deck of 28 square meters, this is the largest boat in the history of our team. In Monaco, the team became world champion in the 'offshore class'. 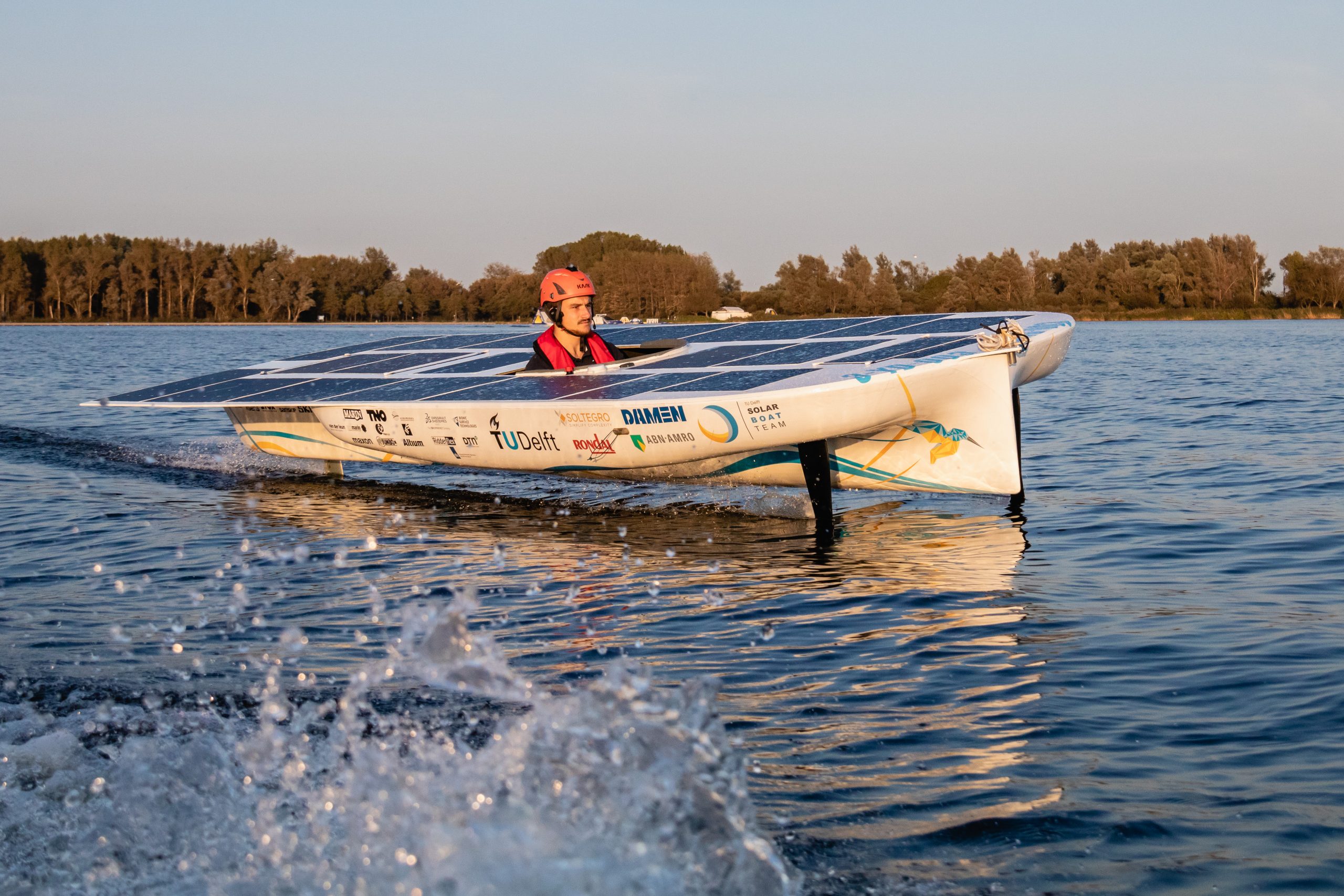 Team 2020The 2020 team has made the boat lighter and smaller, which resulted in a very efficient boat. It can sail on only the power of a water cooker. In addition, the wings of the 2020 boat are made of carbon fiber so that several sets of wings could be produced for different racing elements.